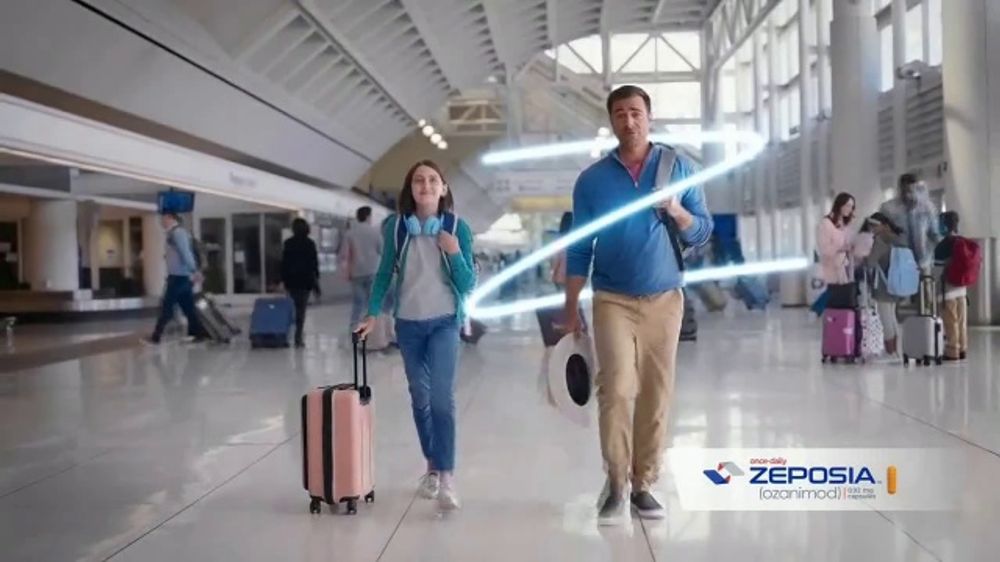 “I won’t let UC stop me from being me,” says a handsome middle-aged father as he travels from the airport to the great outdoors in a fairly classic, no-frills advert for Zeposia, Bristol Myers Squibb’s new ulcerative colitis drug.

BMS has gone for a clean lines approach in its Zeposia ad, implying use of its drug for UC has helped this patient leave his house and travel far with confidence that he won’t have the constant need to use the restroom and can therefore enjoy family life.

Bowel disorders are tricky campaigns to get right: UC in particular is as a condition that’s tough on patients and can drag down quality of life, causing in some the need to empty their bowels dozens of times a day, with accompanying fatigue, loss of appetite and weight loss.

Previous marketing efforts in UC and similar areas like Crohn’s disease have often stuck to a traditional campaign focused on how symptoms are eased but stayed away from the realities of the disorder. In more recent years, however, new players have started to shake things up.

This is because the UC market has become a competitive one, with old stalwarts like AbbVie’s $20 billion-a-year TNF drug Humira leading the way in the U.S., with the likes of Takeda’s integrin therapy Entyvio and Johnson & Johnson’s IL-12/23 antibody Stelara all vying for market share.

There are newer drugs looking to get in on the action as well, like Eli Lilly’s experimental drug mirikizumab, which is slated for an FDA review this year in UC.

BMS is hoping Zeposia as an oral drug can be a new option for patients, but it also competes with Pfizer’s oral JAK inhibitor Xeljanz, though safety issues have put a cloud over the JAK inhibitor drug class in general.

New and more edgy UC campaigns include last May’s “Spill Your Guts,” sponsored by Johnson & Johnson, Takeda and BMS itself, coming from the Crohn’s & Colitis Foundation, which it deliberately created to erase the stigma often associated with these types of disorders.

As part of its campaign, a series of TV ads were shown featuring a different person dealing with the problems that come with undiagnosed inflammatory bowel disease (IBD). Think pain, discomfort and a constant search for lavatory locations.

Takeda, just a few months later, followed a similar approach to Spill Your Guts, setting up a new campaign that wanted healthcare providers to actually feel what it’s like to have IBD with its immersive “In Their Shoes” experience.

This included a downloadable app that manages the experience, sending messages, tasks and challenges that must be completed and recorded. For instance, an HCP may get a message saying, “You need to go to the bathroom now,” and, no matter what they are doing, they must go.

And J&J in August went for a “Bold” Stelara campaign, looking for a new audience during the televised Olympics in Japan by matching athletic perseverance with its message of strength for people living with Crohn’s and UC.

For now, BMS appears content with the low-key form of its Zeposia ad, though there will certainly be more to come from its marketing department in the future.

The drug, which came out of BMS’ Celgene buyout, was first approved in 2020 by the FDA for multiple sclerosis (MS). But, like so many of its competitors, it’s going after a growing number of autoimmune conditions. It nabbed the label for moderate to severe UC last May, making it the first S1P receptor modulator to do so.

It has a list price of around $90,000 and is slated to make anywhere from $1.6 billion to a high of $5 billion at peak, depending on which analyst you ask (and how many extra labels it can pick up). It had a tough launch in MS, coming after a two-year roller coaster (that included an FDA rejection) to even get approved, and COVID issues affected sales.

In the third quarter, the drug made $40 million, but BMS will need to really pump up the marketing if it wants to reach that blockbuster status.